Stronger than your eyes!

How does radar function?

The signal emitted by the antenna is reflected when it encounters an object and returned to its starting point. This principle may be compared with that of sonar. Radome or apparent, the antenna rotates at about 24 rev/min covering 360°around the boat. To minimize energy consumption, the signal (from 2 to 6 kW, depending on the model,) is sent as short pulses and for optimizing the range as a narrow beam (5 ° in the horizontal plane and 25 ° vertically. ) In normal use the boat is at the centre of the screen, boat’s heading at the top. To measure the bearing and distance of a target relative to the boat, we use the VRM (variable range) and EBL (alidade mobile.) It positions the VRM circle and the EBL on the target (boat, coast, rock…) The VRM indicates precisely the distance of the target from the boat and the EBL the range with an uncertainty of about 5 °. 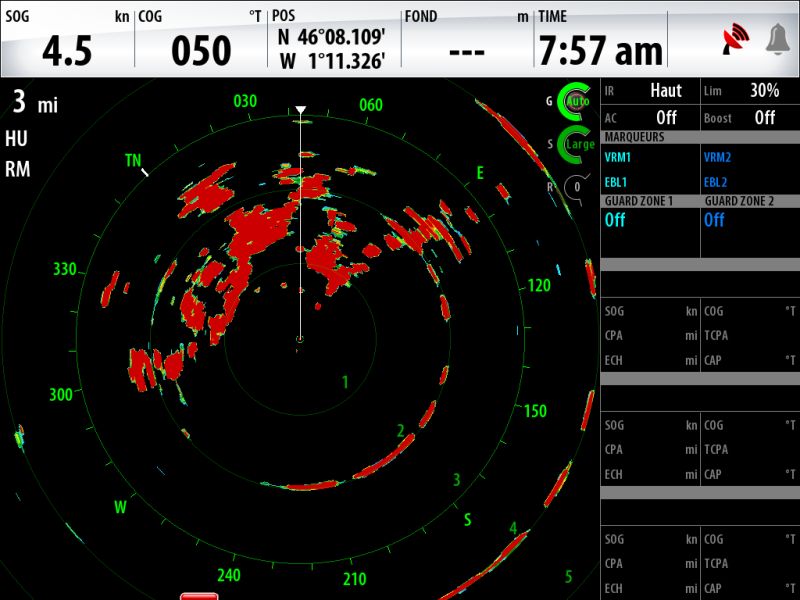 The range is related primarily to the nature of the target and secondly to the power of the radar. The hull of a steel cargo ship returns the maximum signal, a leisure craft, in plastic or wood, the lowest. In practice, one can hope to detect a large steel cargo ship at 10 miles, a small leisure craft at between 3 and 5.

The power has an affect on the distance of detection (remaining within line of sight,) but serves primarily in the separation of two close targets. The object’s position is also important. A flat surface (quay perpendicular to port entrance,) will be almost undetected. If the quay is parallel, it will be because it acts as a mirror.

Radar waves propagate in a straight line. It is therefore tempting to install the antenna at the highest point. In practice, to limit interference from the movement of the boat, the optimum place to install the antenna, isbetween 3 and 5 metres above the bridge (at the level of the spreaders on a sailing boat, or small mast or bridge for a motor launch.) We offer a number of accessories for radar installation.

A radar antenna is a type of micro-wave. Indeed, the waves are emitted on the same frequencies. It is therefore essential, to install it where not harmful to the crew. Staying in the radar waves emitted for too long provides a rapid headache. Avoid!

The Simrad group, in 2010, launched a new generation of radar which works with multiple pulses according to Broadband Technology. This technology has the advantage of consuming less energy, of not over heating not emitting radiation hazardous to humans and of detecting even small targets at close range. At its launch, this radar struggled with discernment at around ten miles. Today the new generation has corrected this.

The radar image is not a photo; it requires practice to interpret it. For your aid, all models have an auto function, you may then move onto specific actions. It is though, a recent feature that allows a better understanding of the radar image, Overlay. This superimposes the radar image on an electronic chart. Thus the target becomes immediately decipherable, whether it is a buoy marked on the map or a ship moving ahead. This function is available only on devices combining radar and mapping.

“Radar is no longer reserved solely for professionals who can interpret the image. The new generation may be understood rapidly and automatically.”