One can class pulleys in five families:
Bearing pulleys
Bearing pulleys are those which present the minimum of friction and permit a smooth and rapid rotation. Ideal? Yes, where rapid manoeuvres are essential and must be repeated often. This is the case, for example, with sails and spi movements but not for manoeuvres which must support static loads, for example a Genoa halyard or mainsail. Subjected to long, heavy loads, the bearings have a tendency to elongate.
Friction pulley
The friction pulley is the simplest to make. A sheave (plastic or composite material,) which turns on an axis (stainless steel or bronze.)Mechanically it withstands significant loads and can be used for every function. Its principal drawback is that it is not fast. It must therefore be reserved for static manoeuvres, in which the strength is more important than the speed (halyard, topping lift, boom vang, runners…) It is generally also the cheapest pulley.
Friction pulley plus bearings
The friction pulley works correctly when the traction is primarily along the axis of the pulley. As soon as there is bias the pulley does not function as well. To respond to this type of manoeuvre, makers have devised friction pulleys with lateral bearings. When the force is lateral the bearings facilitate the rotation, but he load is always kept on the axis, notably during static phases. We find these pulleys at the foot of the mast, on halyards of sailing vessels seeking performance.
Roller pulleys
If one searches for a constant rapid method, capable of bearing high loads, one must move toward another pulley concept; rollers. This technique, in which rollers are placed between the sheave and the axis is widely used in industry; the automobile among others. The rollers provide better rotation under pressure, than a sheave on an axis, the effort is well distributed and the rotation constant whatever the pressure. These pulleys replace friction pulleys and provide better rotation (and a higher price…)
Roller pulleys plus bearings
Like friction pulleys, one finds roller pulleys with laterally moving bearings, to complete the movement when the weight is not held entirely along the axis. 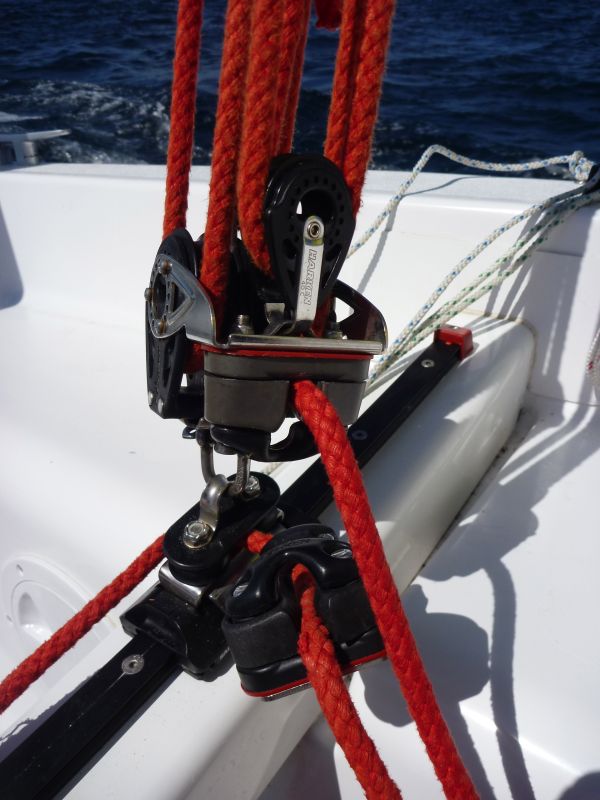 On board one must have at least one snatch pulley. It is used to resume operations under charge, or temporarily replace a broken pulley…Its fitting must be rapid, for example a hook or a strap. For certain manoeuvres, such as runner returns or double sails, one uses pulleys equipped with cam cleats (see our section.)

These anodised aluminium rings are used as friction pulleys. They bear very highloads, offering minimum weight for a very high resistance. They are found on backstays of regatta vessels, barbers, down-hauls or even for lacing.

“The price should not always be the criteria of choice. A high end range bearing pulley can deteriorate rapidly if it is used for a static manoeuvre under pressure.”