The power to raise the anchor

How does it work?

A windlass is a sort of large winch which provides the force necessary to raise the anchor. It is equipped with a gypsy, a toothed wheel designed to hold the chain. Attention; this gypsy must be adapted to the diameter of the chain. For raising the cable, the windlass must be equipped with a warping end; this may also be used as an electrical winch to raise a person to the top of the mast, or for pulling a rope. To facilitate the passage of the chain, today sprockets are mixed (they welcome the chain and block the rope.)

Electric windlass
If your boat possesses an in board motor and you often practice mooring, without hesitation take an electric windlass. For power, up to 6m one can use a 500watt model (traction force of 300kg;)between 6 and 8m a 700watt model, between 8 and 10m a 1000 and between 10 and 15m 1200 to 1500watts. If you often need to raise long chain lengths, oversize, this prevents overheating and will be more rapid.
Electrical windlass comparisons 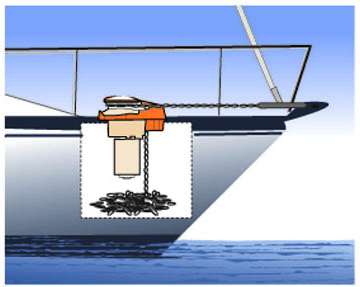 On a boat without in board motor, the only solution is the manual windlass. It provides ample power and is generally not too tiring but remains very slow. It will be especially useful for dropping anchor. For raising the anchor, it is often more practical and faster to do it by hand.
u envisageable et un

This depends on the anchor locker and the location. The vertical windlass poses more problems of integration with the boat (if it is not provided for,) they are principally mounted on units provided by the boat makers. The horizontal offer more fitting options.
Horizontal. A horizontal windlass is placed on the deck or in the locker after the configuration of the boat. The chain must be perfectly aligned (davit/sprocket) and fall vertically into the anchor locker.
Vertical. The sprocket is flat on the deck, the motor under it (anchor locker or cabin.)The chain, after a rotation by the sprocket falls into the anchor locker. The electrical wiring is identical to the horizontal.

The installation of a vertical windlass can be problematic because of its location on deck and below deck space for the drive motor (locker or forward cabin.) The horizontal windlass is less restrictive in terms of mechanical installation. The important points to observe are substantially the same as for the vertical model: the davit/sprocket alignment, the distance between the davit and warping end (minimum 1m,) the angle of the windlass and chain (15 ° maximum)and the capacity of the anchor locker, which must be sufficiently deep for the chain to collect freely, ready to emerge without locking. The position of the gypsy is related
to the windlass. When on deck, having the sprocket and gypsy on the same side facilitates the chain passage. When in the locker, one must keep space for fixing the windlass and the opening of the locker.

The windlass is a major electrical consumer (more than 100A,) but is used for only a few minutes. It is therefore necessary to provide a generator of at least 55amperes and a battery of 110Ah (45Ah for the spirals, see batteries.) Often, motor or propeller motors are used for the windlass. The electrical wiring must be sized according to this current. The line must be protected by a fuse or better by a circuit breaker (see accessories). Remember to take a spare fuse and leave your engine running while you use the windlass.

Tips
To avoid damage to the gears of the windlass, never leave the chain on the sprocket during mooring, bring it to a supporting cleat. When the anchor goes up this aids the motor and thus limits the efforts of the windlass.

To control a windlass, a control with two buttons is needed: one to raise, one to lower. There is also an interrupter foot switch that may be fitted to a flat deck. This is the most standard and effective. The wired remote may be stored in the cabin after use is also practical and not subjected to the weather. The wireless command (radio,) remains the safest. This is especially useful if sailing with reduced crew for any reason.